A Facebook comment led me to recall the words of a 16th century theologian most people today regard as an old fuddy-duddy. First the old fuddy-duddy:

Our wisdom, in so far as it ought to be deemed true and solid Wisdom, consists almost entirely of two parts: the knowledge of God and of ourselves. But as these are connected together by many ties, it is not easy to determine which of the two precedes and gives birth to the other.

John Calvin (1504-1564) was no more a Calvinist than Jesus was a Christian. You can’t follow yourself. He didn’t. He sought wisdom. Many times his search led him to disconcerting conclusions, and actions that trouble me. But the quotation from the very first paragraph of the first page of Calvin’s Institutes of the Christian Religion is pure gold. It’s stayed with me as priceless. They could have come from Carl Jung! 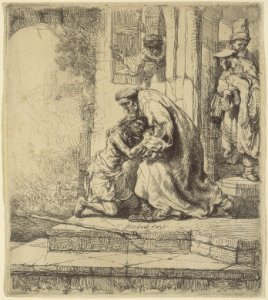 The return of the prodigal son – Rembrandt drawing

Anticipating the FBI’s expanded background check of Supreme Court nominee Brett Kavanaugh, I began to wonder what we’re seeing and how we’re seeing it in light of the two kinds of knowledge that give birth to “the true and solid Wisdom.” Then, almost by accident, I stumbled across a remarkable personal reflection on sexual abuse and sexuality on Facebook. I’d never heard of the writer until this morning. But I do know his mother, a ministerial colleague, who appears to have raised him to search for two parts of wisdom.

With the writer’s permission, we share here the LINK to the personal reflection on Facebook. It’s long, but well worth the read.

150th anniversary logo of The Nation

Sasha Abramsky’s article “Trump is a Cornered Megalomaniac — and That’s a Grave Danger to the Country” (The Nation, May 21) examines the growing crisis in the White House and the clear and present danger it poses.

“Men like Trump,” says Abramsky, “do not fade gently into their political night. Rather, with all nuance sacrificed in pursuit of their senescent need for the spotlight, they scrabble and scratch, lash out and fight. With no self-limiting or self-correcting moral gyroscope, they go down whatever paths they believe offer them the best chance of survival.”

I read Abramsky’s article yesterday and recalled a brief conversation last December aboard ship on The Nation Annual Cruise.

This morning the President was playing from the script, doing Abramsky warned he would: fighting back, lashing out at the “fake media” who don’t want him to “drain the swamp of Washington bureaucrats” in order to “make America great again,” the media who have treated him worse than anyone in American history, against those who keep making stuff up like “the Russian thing.” Donald Trump was using “all the tricks of the demagogue as he fights for his survival” (Abramsky).

A Facebook “Friend” posted a Trump call for readers to rise up in support of the victimized people’s President. This afternoon I can’t seem to find it and wonder whether perhaps Facebook, which revised its policy that allowed splattering false news in the 2016 election, had censored the post as faux news. Whatever the reason for the post’s disappearance, the reason for its initial appearance was clear.

But, hey, who knows what may happen?

The President’s trip includes a meeting with the Pope. Maybe Pope Francis will hear his confession, convince the beleaguered, lapsed Presbyterian president to resign, and convince the likes of my lapsed Catholic Facebook Friend that wise people don’t confuse demagogues with victims.

Ted Bonsall and I became lifelong friends back in Kindergarten in Broomall, Pennsylvania. We played ball in each other’s yards every day for years. I have pictures to prove it!

All these years later, FaceBook invited me to wish Ted (“Russell”) Happy Birthday!”

FaceBook wasn’t around way back in 1947 in Broomall. It didn’t know Ted then and doesn’t seem to know him now. Although Ted died of cancer several years ago, his Facebook page is still up. Like memory itself, his page can never be erased by time.

I have made a new “Friend” on my FaceBook:
It is Francis, the Pope–you can look;
But he never will “Comment”,
Or will “Like” what I present,
He just Pronounces and quotes the Good Book.

“In His Word, the Bible, God has already defined marriage, as well as sin, and we should obey that rather than looking for ways to redefine it according to the desires of our culture. Marriage is defined as between a man and a woman—end of discussion. Anything else is a sin against God, and He will judge all sin one day.”

“I’m sorry, sir, but you have yet to do your homework, and your statement “End of discussion” separates you from the more humble approach of the father whose name you proudly bear. Without interpretation and re-interpretation those who take the Bible at face value should also hold steadfast to the cosmology of a flat earth.

As a Presbyterian (USA) pastor since 1967, I have watched and heard the debates about the nature of human sexuality since 1979. The discussion within the church have not been without rancor or turmoil, but I’m proud that my church has had the courage to look at human sexuality and biblical hermeneutics through the lens of “the rule of love” not hate, separation, exclusion, or one’s own righteousness.

As a pastor who began hearing the stories of gay church members many years ago, I sensed that the prevailing view of homosexuality as a sickness and/or sin was off the mark and damaging to the heterosexual majority no less than the homosexual minority. There is no distinction at the baptismal font. No distinction allowed at the Lord’s table. And, at long last, I am now free, according to the Constitution of the Presbyterian Church (U.S.A.) to make no such distinction at the kneeling bench before the altar.

My right hand has a callus where
I hold my iPhone when I read
or type.  I’m losing feeling on
my thumb tip where I tap the bare
small screen.  My left hand learned to feed
my mouth while I still grip the phone.

My wrist has carpel tunnel pain–
I’m on-line more than off.  I reach
inside my pocket more each day
for phone than wallet or a coin,
a penknife, or a handkerchief.
On-line Scrabble is all I play…

Are FaceBook friends my only friends?
Am I alone with just my phone? 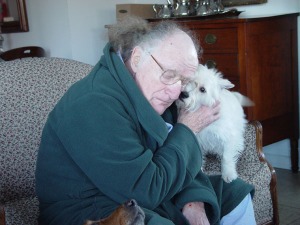 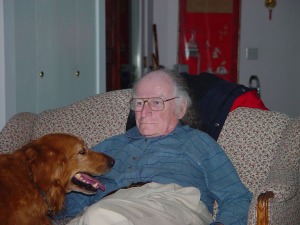 Ever since posting about the loss of Maggie and Sebastian we’ve been flooded with affectionate Facebook comments.

Dogs touch the deepest parts of us. These photos were taken in the home of Doug and Mary Hall in Wabasha, MN several years ago. Doug, a “street lawyer” (John Gresham) if ever there was one, founding Director of the Legal Rights Center, Inc. in Minneapolis, lawyer for American Indian Movement occupation of Wounded Knee, and restorative justice pioneer, was dying of cancer.

Click Nature Boy for Nat “King” Cole singing there was a boy who wandered far only to learn that “the greatest thing is to love and be loved in return.”

If you want attention…No…if you want to love and be loved in return, become a nature boy or girl. Get yourself a dog or two. You’ll be blessed by them. And, when they finally leave your side, your friends will sympathize.

unknown insinuated itself in-

side the mind of the communicator,

insistently removing all the in-

formation that was thought to be secure.

vil adam-lurking where there is no prayer.

Long before I got hooked on Facebook, my childhood friends and I used to play outside until it got dark.  Capture the Flag was our favorite game.If you had the flag, your job was to keep it; if you didn’t, your job was to capture it.  Only one person had the flag; the rest of us worked together until one of us got it.  And when one of us did, the game started over again.

Even if you hadn’t captured the flag that night, you went home knowing that tomorrow you had another chance.  Nothing was forever in the game of Capture the Flag.

When we played the game as kids, there was a nearly level playing field.  The slowest of us had less of a chance than the fastest, but even the slowest and the smallest had a shot, if we worked together to capture the flag.

It’s not that different now, except that the bullies have money the rest of us don’t have. They’ve also learned how to divert our attention. Well-funded mind-bending scare tactics seek to convince voters that the flag has actually been in our pocket and that we, not they, are losing control of our country if health care reform, action on climate change, and reigning in Wall Street are the results of the November election.

It’s time to go out to the backyard and play the game again. Time to stand up together to reign in Wall Street and the U.S. Chamber of Commerce and to tell our friends in the Tea Party that  deregulated, laissez-faire capitalism will serve only the fittest, not the many. Time to snatch the Stars and Stripes out of the deep pocket of the bullies who paint themselves as America’s last, best hope. No one gets to keep the flag in the United States of America.