Samuel Clemons (“Mark Twain”) wrote in his autobiography words akin to the Gospel of Mark’s briefest description of Jesus’s 40 days and nights in the wilderness:

“With the going down of the sun my faith failed and the clammy fears gathered about my heart. Those were awful nights, nights of despair, nights charged with the bitterness of death. In my age as in my youth, night brings me many a deep remorse.

None of us is ever quite sane in the night. Our faith fails. The clammy fears gather in our hearts. Despair descends. It is into this primitive night of the soul that Jesus enters when Mark describes Jesus’s wilderness temptation with one line:

“He was with the wild beasts, and angels ministered to him.” 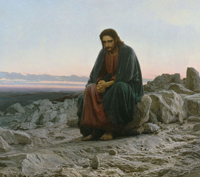 Christ in the Wilderness -Kramskoi

In Mark’s Gospel there is none of the later Gospel’s three temptations. Jesus simply enters that frightening solitude Gerard Manley Hopkins described as a miserable soul “gnawing and feeding on its own miserable self.”

The wild beasts of Mark and of the Hebrew Scripture are symbols representing the violence and arrogance of nations and empires: the lion that threatened David’s sheep; the lion with wings and a bear gnawing insanely on its own ribs in Daniel’s dream; a leopard and a dragon with great iron teeth destroying everything in its way. The beasts of Daniel and the Hebrew Scripture symbolize the deepest threats, threats to human wellbeing and existence itself. In Daniel’s dream, when the Ancient of Days takes his judgment seat and gathers the nations (wild beasts), they are as nothing before him, but “of his kingdom there shall be no end.”

Like Samuel Clemons, with the going down of the sun [our] faith fails and the clammy fears gather about my heart.

In his book Man Before Chaos Dutch philosopher-theologian Willem Zuurdeeg argues that all philosophy and religion is born in a cry. Whether the great philosophies of Plato or Aristotle or Hegel, whether Buddhism, Judaism, Islam, Christianity or what we arrogantly describe as ‘primitive’ religions; whether the political philosophy of Western democracy or Islamic theocracy or one or another economic theory – capitalist, socialist, communist, or communitarian – all philosophy and religion is born in a cry for help. It is the primal cry of human vulnerability, our  contingency, our finitude, our mortality. It is the cry for order, protection and meaning in the face of the chaos without and within.

Separated from all social structure and from all the answers that express or muffle the cry, removed from civilization and all distraction – no computers, no video games, no reading material, no play stations, no TV, no artificial noise, nothing unreal to distract him – in the wilderness of time, “he was with the wild beasts.”

“He was with the wild beasts” is a kind of cliff notes for Jesus’ entire life and ministry. He would dwell among the wild beasts – the unruly principalities and powers that defy the ways of justice, love and peace.  He lived and died among the wild beasts that mocked him at his trial – “Hail, King of the Jews!” – stripped him of his clothing, plaited a crown of thorns believing they had seen the end of him. But after the beasts of empire had torn him to shreds, he become for us the crucified-risen King whose love would tame us all.

There are times for each of us when the beasts are all too real, moments when faith falters, nights in the darkness when despair gnaws and paws at us, and hope has all but disappeared.

A young woman sits in the Atlanta airport. She is returning home from a year of study abroad. All flights have been delayed because of a storm. She is anxiously awaiting the final leg of her journey home. But home as she had known it no longer exits. Her mother and father have separated. Her father has entered treatment for alcoholism. She has entered a wilderness not of her own choosing. The beasts are tearing her apart. Her ordered universe has fallen apart.

She goes to the smoking lounge to catch a smoke. A stranger, her father’s age, sits down. He jolts her out of her fog. “Do you have the time?” he asks. As strangers are sometimes wont to do, they begin to talk. Unaware of her circumstances, he tells her that he is a recovering alcoholic, a former heavy drinker whose drinking was destroying his marriage until his wife became pregnant. The impending birth of his daughter snapped him into treatment and sobriety. “I thought I was going to die,” he says, “but it was the beginning of a resurrection, a whole new life.”

The young woman begins to feel a burden lifting. The stranger finishes his cigarette and disappears. She never gets his name.

The loudspeaker announces her flight’s departure. She boards her flight, and as the plane rises through the clouds, she finds herself momentarily sandwiched between two sets of clouds – one below, one above – and the space between is filled with rainbow light, a world whose grandeur and grace exceed all reasons for despair. She is strangely calm in the face of what lies ahead. A sense of peace descends. She is sure that the man has been given to her as a gift. She has been with the wild beasts. An angel has ministered to her.

During these 40 days and nights of Lent we live more consciously with the wild beasts, praying that the angels of our better nature will minister to us in the wilderness of time, dreaming with Daniel and Jesus of the Ancient of Days taking his judgment seat and gathering the nations. They are as nothing before him, but of his kingdom there shall be no end.

Once upon a time a pompous nobleman paid a call to the English Embassy in St. Petersburg, Russia. He walked into the office and demanded to see the ambassador immediately. “Pray, take a chair,” said the young attaché, “the ambassador will be here soon.”

The visitor took exception to the off-hand way he had been treated. “Young man, do you know who I am?” he demanded, and recited a list of his many titles and appointments.

Pride, vanity, greed, self-deception, and illusions of grandiosity are part of the human condition.

We are creatures of the wilderness, wanderers and sojourners in time who have here no lasting city to dwell in. And so, as in the legend of the Tower of Babel in The Book of Genesis (chapter 11), we (humankind) come upon the Plain of Shinar . . . or some other version of it. . . and settle down to rid ourselves of anxiety . . . and we settle there as though we could build something permanent that would be a fortress against the uncertainties of the wilderness and the knowledge of ultimate vulnerability and ultimate dependence. We build our own societies and towers of Babel.

Yet there is something about us that still loves a wilderness. Something in us that knows that refusing the nomadic wilderness – “and as they journeyed, they came upon the Plain of Shinar, and settled there” – is fraught with greater danger and social peril. Something in us knows better than to settle down on the Plain of Shinar to build something impervious to the dangers of the wilderness and time. Something in us knows that the brick and mortar will crumble, that the projects of pride, vanity, and greed will fall of their own weight, and that the high towers we build with the little boxes at the top that presume to house and control Ultimate Reality (G-d) are little more than signs of a vast illusion, the vain act of species grandiosity. For in the Hebrew tale of the tower of Babel with its “top in the heavens,” the joke’s on us. The narrator speaks truth with humor: God has to come down to see this high tower.

Every society and culture has its own version of the city and the tower of Babel. Equally so, in every society there is at least the memory of the wilderness, a sense of call to recover our deeper selves as mortals whose destiny is only found by traveling beyond the politics and religiosity of pride, vanity, greed, self-deception, and grandiose illusions.

Jesus begins his ministry in the wilderness. He partakes of John’s baptism, and when he did, the Spirit grasped him and called him further into the wilderness, “drove him into the wilderness” – away and apart from all distractions and illusion – back to the place where humankind lives before it “settles” to build the political-economic-religious tower, the impervious fortress and monuments to itself in the Plain of Shinar.

Those who would learn from the Genesis legend and those who wish to follow Jesus are called into the wilderness to restart the long spiritual journey that stopped too early.
For the fact we deny is that underneath all our steel, glass, and technology, we are still animals – mortals subject to the most primitive yearnings, vulnerable creatures who possess nothing.

In his poem “The Wilderness” American poet laureate Carl Sandberg realized a great truth long before it came into vogue.

There is a wolf in me . . . fangs pointed for tearing gashes . . . a red tongue for raw meat . . . and the hot lapping of blood—I keep this wolf because the wilderness gave it to me and the wilderness will not let it go.

O, I got a zoo, I got a menagerie, inside my ribs, under my bony head, under my red-valve heart—and I got something else: it is a man-child heart, a woman-child heart: it is a father and mother and lover: it came from God-Knows-Where: it is going to God-Knows-Where—For I am the keeper of the zoo: I say yes and no: I sing and kill and work: I am a pal of the world: I came from the wilderness.

Jesus of Nazareth, whom Christians call The Christ, walked in our wilderness to live authentically and faithfully as a human being among all the beasts of the menagerie that were part of his nature and are part of our nature. Immediately after he had gone down into the waters to die to the worlds that would fool and twist him, and just as quickly as the voice from heaven declared him “my beloved Son in whom I take pleasure,” the spirit immediately drove him into the wilderness. As the Gospel of Mark narrates the story, he was there for forty days among the wild beasts, and angels ministered to him.

By God’s grace and power, may it be so also with us.