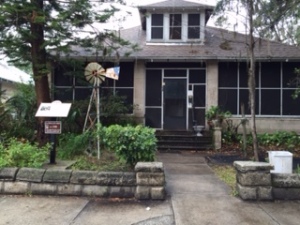 On Martin Luther King Day 2015 the historic house next door to us on The Freedom Trail here in St. Augustine is a faint shadow of its former self. A weathered sign by the rear entry reads:

“NO TRESPASSING by order of the City of St. Augustine. Violators will be prosecuted to the full extent of the law.”

Some of the louvered glass windows on the back porch are broken out. Sheets and blankets cover the windows.

The White family paid the price for their courage. James and Hattie were leaders in the Civil Rights Movement, as was their son Samuel. But, as Isaac Watts (1674–1748) reminds us in his poem and hymn “O God, Our Help in Ages Past”:

Time, like an ever-rolling stream,
Bears all its sons away;
They fly forgotten, as a dream
Dies at the opening day.

Time has a way of placing brackets around even the best historic moments. James, Hattie, and Samuel, their 14 year-old son, who was sent to reform school for sitting in at the downtown St. Augustine Woolworth’s, have been borne away by time. The three of them are deceased; their story and the dream is still alive.

When young Samuel and his three friends later known as “the St. Augustine Four” were arrested at Woolworth’s, the authorities agreed to release them to their parents’ custody on one condition: that they sign a statement that their children would not violate the law again. The four young men pleaded with their parents not to sign the pledge, assuring their parents that they, the sons, could make no such pledge. Mr. and Mrs. White refused to sign. Fourteen year-old Samuel was sent to reform school for a year. He served six months of the sentence before Dr. Martin Luther King, Jr., Jackie Robinson and other civil rights movement leaders came to St. Augustine to shine the national spotlight on St. Augustine. Samuel and the other incarcerated member of The St. Augustine Four were released by order of the Governor of Florida. The Civil Rights Act followed.

For all the saints, who from their labours rest,
Who Thee by faith before the world confessed,
Thy Name, O Jesus, be forever blessed.
Alleluia, Alleluia!

And when the strife is fierce, the warfare long,
Steals on the ear the distant triumph song,
And hearts are brave, again, and arms are strong.
Alleluia, Alleluia!

We knew nothing about St.Augustine when we rented the house at 96 South Street for the month of January. It turns out that the house next door played an important part in the Civil Rights Movement. 94 South Street is on “The Freedom Trail” tour in St. Augustine in Lincolnville, the district settled by freed slaves in 1866.

Newly arrived, we notice that a group  gathers each day outside the house. Our second evening I walk by the house at dusk and greet the gray-bearded man sitting in a chair. He rises with his cane. 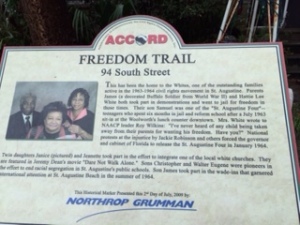 “Read the sign,” he says, limping to the plaque next to the sidewalk. “Read it.”

I read it out loud.

Home of the White Family – Lincolnville

This has been the home to the Whites, one of the outstanding families active in the 1963-1964 civil rights movement in St. Augustine.  Parents James (a decorated Buffalo Soldier from World War II) and Hattie Lee White both took part in demonstrations and went to jail for freedom in those times.  Their son Samuel was one of the “St. Augustine Four”–teenagers who spent six months in jail and reform school after a July 1963 sit-in at the Woolworth’s lunch counter downtown.  Mrs. White wrote to NAACP leader Roy Wilkins, “I’ve never heard of any child being taken away from their parents for wanting his freedom.  Have you?”  National protests at the injustice by Jackie Robinson and others forced the governor and cabinet of Florida to release the St. Augustine Four in January 1964.

Twin daughters Janice and Jeanette took part in the effort to integrate one of the local white churches.  They are featured in Jeremy Dean’s movie “Dare Not Walk Alone.”

Sons Christopher and Walter Eugene were pioneers in the effort to end racial segregation in St. Augustine’s public schools.  Son James took part in the wade-ins that garnered international attention at St. Augustine Beach in the summer of 1964.

This marker is erected by ACCORD to honor all of the members of the family for their efforts to make St. Augustine, America, and the world a better place.

Christopher still lives in the house.

So here we are vacationing next to history. Look for more posts from conversations with Christopher and the people at St. Paul A.M.E. Church after the “Hands Up” workshop this Saturday.