During the course of this election season much has been written about Narcissus, the self-absorbed figure of the classical myth of Narcissus. Less attention has been paid to the larger context in the myth itself and its application to the American political scene: the figure of Echo and the Pond which reflect back Narcissus’s claims for himself.

Without Echo, the scorned, talkative nymph who loses her voice except to echo Narcissus’s words, and without the Pond which reflects back the beautiful image Narcissus lives and dies to see, there would be no Narcissus. 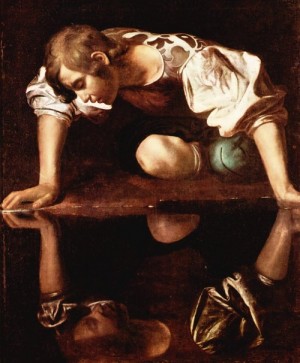 The American Psychiatric Association’s Diagnostic and Statistical Manual of Mental Disorders (DSM-5) describes Narcissistic Personality Disorder as “a pervasive pattern of grandiosity (in fantasy or behavior), need for admiration, and lack of empathy, beginning by early adulthood and present in a variety of contexts . . . .”

• Having an exaggerated sense of self-importance
• Expecting to be recognized as superior even without achievements that warrant it
• Exaggerating your achievements and talents
• Being preoccupied with fantasies about success, power, brilliance, beauty or the perfect mate
• Believing that you are superior and can only be understood by or associate with equally special people
• Requiring constant admiration
• Having a sense of entitlement
• Expecting special favors and unquestioning compliance with your expectations
• Taking advantage of others to get what you want
• Having an inability or unwillingness to recognize the needs and feelings of others
• Being envious of others and believing others envy youBehaving in an arrogant or haughty manner.

If Donald Trump is elected President, it will be because he successfully channeled long-festering sources of anger—“Make America Great Again” as in a former age when Mexican immigrants, blacks, and non-Christians knew their place in a white, Christian nation with a manifest destiny—or because he echoed the American public’s deep frustration with political gridlock and partisan posturing.

If, on the other hand, Mr. Trump is refused the Oval Office, Echo will continue to be obsessed with his voice. Though not as alarming as a Narcissist with a nuclear arsenal at his command, there is little comfort in a disentitled Narcissus manipulating global media as his mirror.

The socio-psychic health of Echo and the Pond (the social mirror) will determine the extent to which the dynamics of the Narcissus myth become the permanent disorder of American political life.

It may help to remember that, according to Tiresias, the blind prophet of Thebes, Narcissus will “live to a ripe old age, as long as he never knows himself.”

How long Narcissism prevails in American society depends on the American Echo and the mirror into which Narcissus looks—whether the American electorate will choose to see Narcissus and ourselves as we really are —a sad man with a public echo without self-knowledge.

In the ancient myth, Narcissus grows increasingly thirsty, but his reflection in the water is more important than slaking his thirst. Enamored with his own reflection but dying of thirst, he refuses to drink because he loses the reflected image whenever he gets close enough to sustain his life. Narcissus dies of thirst, and, according to the Greek myth, at that moment, a lovely flower – a Narcissus (daffodil or joncus) – blooms next to the pond. 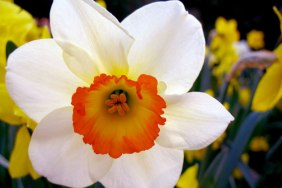 In the wake of this electoral flirtation of Echo and Narcissus, the story won’t be over no matter who occupies the Oval Office. Yet there remains the hope that something more beautiful and natural than a personality disorder will rise next to the pond of what remains of the American democratic republic, and that Echo will get back her own voice.

4 thoughts on “American Echo and Narcissus”