The Hearst Free Library in Anaconda, Montana is on the National Historic Register. During our four weeks here serving St. Timothy’s Memorial Chapel in Southern Cross, I travel daily to Anaconda to use the library’s internet access.

Walking into the library this morning I noticed a pickup truck with a Confederate flag decal on the back window of the cab. The hackles went up on the back of my neck. The urge to scratch the decal from the window momentarily crossed my righteous mind until I took note of something else. 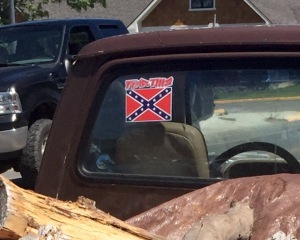 The pickup truck with the Confederate Flag decal

The truck was old and in poor repair. Its bed was messy, filled with a random collection of stuff. This was not a 2015 GMC Canyon or Cadillac Escalade EXT. It belonged, I surmised, to a poor white guy or woman, or a poor white couple hanging on by their fingernails to what little they have.

Anaconda, MT is a fascinating place to live for a month. Once the world center of copper mining, the city of 9,300 residents today is living with great resilience on this side of the mine’s closing in 1987 and the SuperFund clean up that continues into the present.

There is great pride here in their history and in their capacity for survival beyond the abandoned mine shaft and silent smelter stack that still stands proudly, preserved by Anacondans who opposed its demolition by Anaconda Copper’s successor, ARCO. The stack is the oldest smelter stack in the world, large enough for the Washington Monument to fit inside it.

Miners are a sturdy lot. So are their descendants. The closer a visitor draws to the heartbeat of knowledge, persistence, and compassion in Anaconda — the Hearst Free Library — the more one respects and appreciates the town once built by corporate America and left to fend for itself when its usefulness had ended.

Class is the issue in America. But as soon as class comes into play, race becomes the easier target. When the company owners whose workers produce wealth throw away a town the way we throw away paper towels, racial differentiation produces the scapegoat for poverty. A young white man enters an historic black church, sits down for the Bible study for an hour, considers not pulling the trigger because they seemed like “nice people” and blows nine people away. A poor man’s pickup with a Confederate flag decal is parked down the street from the Hearst Free Library in Anaconda, Montana. What that flag stands for can, and does, show up anywhere in America.

1 thought on “The Confederate Flag Outside the Library”