Irony is the word for this out-of-sorts time where the anti-Darwinian creationists are the proponents of the survival of the fittest. Think net neutrality. Think tax policy that favors the strongest. Think disregard for the weak, those less able to survive if left to the forces of a survival of the fittest free market. Think selective readings of the Bible.

Think rabbits and owls. Not the way we usually think of them, but the way I thought of them the other night after hearing what I thought was a child screaming. It was a blood-curdling cry from the sidewalk just outside our home.

Going outside to see what had happened, what did I see but a large bird (an owl) flying from the tree overhead, dropping the rabbit it had just attacked for dinner. The rabbit never had a  chance. Aside from its kin somewhere in a nearby briar patch and the “superior species” who heard the screams, the rabbit’s disappearance was without consequence. It’s nature doing its thing. 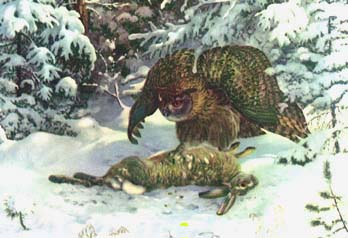 Like the economy of Darwinian creationists. There is a mindset beneath the surface of the socio-economic policies being enacted into law by Congress. Creation versus science when it comes to climate change. Creation versus compassion when it comes to the human equivalents of rabbits and owls, hawks and field mice, coyotes and puppies. The strongest will survive. The weak will not. And it’s all part of God’s plan. It must be. Or it wouldn’t be. And, as for the Hebrew prophets who say otherwise — Amos, who thundered divine judgment of the rich who slept of beds of ivory made from the tusks of slaughtered elephants while they trampled on the poor; Micah, who summarized good religion as doing justice, loving kindness/mercy, and walking humbly; and Jesus of Nazareth, who gathered 5,000 hungry people for a free lunch, lifted up the poor, reached out to the maimed, the sick, the leper, the foreigner, and declared “Woe to you are rich!”and ““Watch out! Be on your guard against all kinds of greed; life does not consist in an abundance of possessions” — their cries on behalf of the rabbits fall on the deaf ears of the Darwinian creationists.

“Let those with ears hear,” said Jesus. Who among us has ears to hear and eyes to see?

“Pieter Bruegel Bruegel . . .  castigated  human weakness . . .  with avarice and greed as the main targets of his criticism that was ingeniously expressed in the engraving The Battle Between the Money Bags and Strong Boxes” (Encyclopedia Britannica).

The great irony of the theological creationist-economic Darwinians is that the human species has developed talons but lost our ears as the strong who are meant to have dominion over the weak and over nature itself.

So long as we avoid the faith issue here, the rabbit will lose. It fall to those of us who espouse the Judeo-Christian faith and biblical tradition, to do in our time what Pieter Bruegel the Elder did in his: engage the discussion with those within the same tradition whose hearing seems impaired.

Without that discussion, the rabbits in America and around the globe will be left to predators whose ironic Darwinian economics have nothing to do with informed biblical faith, the survival of anything worth saving, or reality itself. All will be left to the battle between empty money bags and rusted strong boxes. 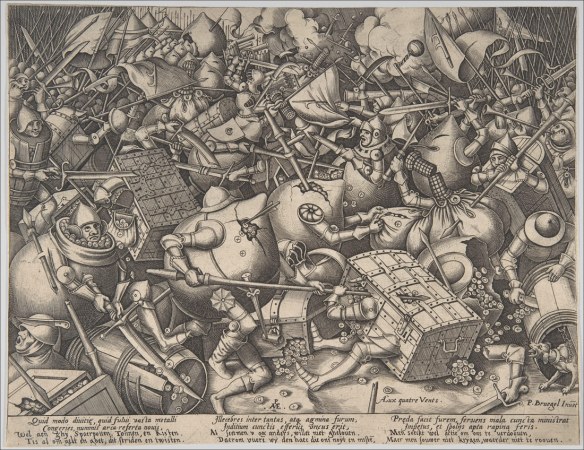 Pieter Bruegel the Elder, The Battle of the Money Bags and the Strong Box