Christopher Smart (1722-1771) was an English incurable pauper poet institutionalized in Saint Luke’s Hospital for Lunatics whose poetry, like Vincent Van Gogh’s art, continues long after his death in spite of, or perhaps because of, what we now call mental illness.

Smart’s poetry is not as widely known as Van Gogh’s Starry, Starry Night. But it is well-known among other poets, musicians like Benjamin Britten, and worshipers who sing from the Episcopal Church Hymnal, as I did yesterday on the Second Sunday of Easter.

The fourth stanza of “Awake, Arise, Lift up your Voice” leaped from the page, as fresh today as it was the day Smart wrote it:

His [Christ’s] enemies had sealed the stone as Pilate gave them leave,

lest dead and friendless and alone he should their skill deceive.

And then the fifth stanza:

At the very moment Christopher Smart was coming to my attention, the French were casting their votes, confused and fearful in the wake of England’s Brexit, wailing sirens on the Champs-Élysées, and candidates loudly debating whether sanity demands sealing the nation’s borders. 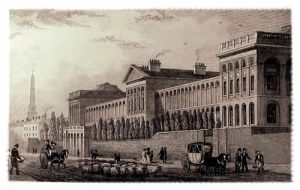 Christopher Smart’s biographers suggest that today Christopher would be diagnosed as bi-polar. He was committed to the Saint Luke’s Hospital for Lunatics after episodes when, it is said, Christopher would suddenly drop to his knees on the street in prayer, loudly inviting by-standers to join him, a different kind of street preacher who causes saner people to cross to the other side of the street.

But sometimes “the lunatics” are smarter than we. They see what those of us who avoid them often fail to see: the Dead and Friendless One meeting us, like Christopher and Vincent, in times of lock-down madness, until we sing Smart’s hymn two-and-a-half centuries later on the Second Sunday of Easter.