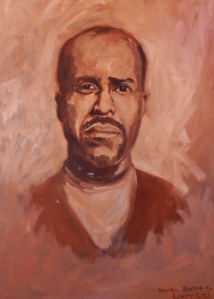 This is a tale of a different kind of meeting with a man named Martin and another man named Robert who seemed to know me, though I’d never heard of him and never heard from him again.

I met Martin Gonzalez Sostre face-to-face after a guard at Clinton Correctional Facility at Dannemora, New York confided that the internationally famous prisoner-rights advocate held in perpetual solitary confinement beyond the reach of visitors was being transferred temporarily the next day to the Federal Detention Center in Lower Manhattan (NYC) for purposes of testifying as a witness in another prisoner’s trial.

THE TRIP TO THE FEDERAL DETENTION CENTER

Two days later I make the eight-hour drive from our home in Canton, NY to New York City, unsure whether Martin will agree to see a stranger – an unknown Presbyterian minister coming to visit his Anarchist Muslim parishioner!

Entering the newly-opened Metropolitan Corrections Center, it feels like stepping into a different world.  At the reception desk, the clerk asks my business.

“Do you have an appointment?” “No.” “What’s your relation to the inmate?” Pointing to the clerical collar I’ve worn for just this reason, I answer, “I’m his pastor.” My heart leaps and my stomach does a flip-flop. What if Martin doesn’t play the game? What if he says he doesn’t have a pastor, that he’s a Muslim, and that whoever it is in the waiting room is a fraud? What happens then?

TWO HOURS BEFORE: A CALL FROM “ROBERT”

Before going to the Federal Detention Center I had stopped by the NYC office of New York United Ministries in Higher Education (NY/UMHE) to say hello to three campus ministry colleagues in New York City. I had never been to their office before.

While visiting with Dave in Dave’s office, the receptionist spoke through the intercom. “There’s a call on line 2 for Gordon Stewart.”

I took the call, thinking perhaps my family was trying to reach me about a family emergency, hoping against hope that my colleagues at the NY/UMHE office might have some contact with me. It wasn’t my family.

“Robert” is calling me – an unknown campus minister from Northern New York – for legal assistance?

THE VISIT WITH MARTIN

By the time I arrive at the Federal Detention Center, I’m more than a little anxious; the possibility that Martin might reject the visitation increases it.

They lead me into the prisoner visitation room – a long hall of small booths with glass between the visitors and the inmates in front of them and glass on either side of the booth that separates adjacent visitors while allowing the guards full visibility of every interaction.

I take my seat in the visitation booth and wait. One by one the inmates descend a metal staircase to my far left. How will I know Martin? I know him by reputation only as a man with a sense of dignity, but I’ve never seen a picture. How will he know me?  He doesn’t know me. How will he know which visitor is his? I hope the clerical collar is enough.

A man comes down the stairs. His posture is erect. His head shaved. This is a man of self-respect. His appearance resolute. His eyes searching. When he sees the collar, he makes his way down the corridor to the glass booth. He looks me in the eye, smiles broadly, and   puts his right hand up to the glass! I place my left hand against the glass to “meet” his, a different kind of handshake.

He picks up the phone. I pick up mine. “How you doing, brother!” he says. “Thanks for coming. Everything we say here is monitored. . . . It’s so good to see my pastor!” We both smile, acknowledging the coded communication. I bring him greetings from the group in Northern New York who are working publicly for his release by the Governor. We talk about his well-being, his hopes, and whatever messages he wants carried back to his other unknown and un-named friends. The visit is short. When the time is up, he puts his hand up again on the glass. I follow his lead. “Keep the faith,” he says, with a smile. “We will. I promise. Peace!”

Sostre remained in prison until his sentence was commuted in 1975 by Governor Hugh Carey amidst political pressure from Amnesty International and dozens of Martin Sostre Defense Committees throughout the country. Of all Sostre’s contributions to the prisoners’ rights movement – establishing the constitutional rights of prisoners, fighting for access to legal materials, and establishing unions and advocating a minimum wage – his greatest contribution was to understand the relationship between state repression and prisoner radicalism. As he wrote following the Attica Uprising in 1971: “If Attica fell to us in a matter of hours despite it being your most secure maximum security prison-fortress equipped with your latest repressive technology, so shall fall all your fortresses, inside and out. Revolutionary spirit conquers all obstacles.”13

During the eight hour drive home from the visit with Martin, I sensed again that there was a very thin line between the maximum security prison-fortress equipped with its latest technology and the one outside the walls. 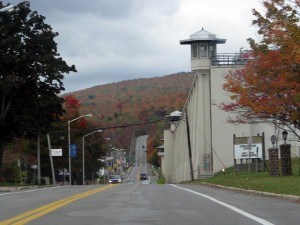 I never learned who “Robert” was. But I learned that “Robert” is never far away from the telephone. Nor is the dignity and courage of Martin. In the surveillance society, only fear commits us to solitary confinement; courage releases us.