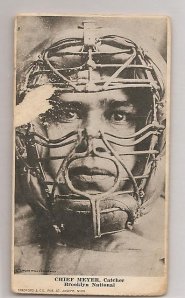 William (“Bill”) Young, author of John Tortes “Chief” Meyers: A Baseball Biography , tells the story of the American Indian ball player “Chief” Myers in this radio interview with Steve Shoemaker, host of “Keepin’ the Faith” on WILL.AM at the University of Illinois.

Looking for advice on how to stay together? A wise old owl speaks in verse this morning:

It takes two, of course, since either one

is free to leave at any time.

But if both are strong and firm to come

and work together, you may find

problems can be solved.  Sit side-by-side

and face the issue–not your mate.

before you even start to speak.

If the conflict is not solved, you still

have both shown that you have the will,

faith, and hope to stay together.  Love

will not come floating from above:

love is built by kindnesses and care–

hard work can save you from despair.

Preliminary notes from “the editor”: 1) “The Lectionary scriptures” to which Steve Shoemaker refers are suggested readings for each Sunday; 2) Douglas John Hall is emeritus Professor of Theology at McGill University in Montreal, Quebec and a prolific author on God and human suffering.

Verse —  What to Preach?

(With thanks to Douglas John Hall.)

The Lectionary scriptures are a start,

and in the newer testament, the word

of Jesus burns and leaves a scar:  the heart

is moved, the mind is taught.  The acts of God,

the miracles, may be hard to believe,

but are (in fast close-up) no stranger than

from vine to wine,  from seed to bread,  from eve

to dawn,  that I see every day.  And when

the older testament is read,  I hear

the call to love my foes, to greet the new,

the alien with cheer, to feed the poor:

all lessons good and clear–but hard to do…

The Preacher may well be afraid to say it,

but don’t blame failure of the Holy Spirit!

Two Hours by Bus–Hop On & Off!

into his mike to the polyglot group

aboard  the double-decker bus that took

them slowly winding through Chicago’s Loop

He thanked each one who put a buck into

the duct-taped peanut jar on their way out,

but few responded generously to/ his hints.

He had a tendency to pout.

He kept repeating “Stay in your seats when

the bus is moving!”  But the kids would run

the aisles and up and down the stairs.  He then

would yell, “Sit down!” –but did not spoil their fun:

He was forceful in his use of language,

– Steve Shoemaker, host of “Keepin’ the Faith.” Archive programs, including two with Gordon C. Stewart, can be heard anytimee @ www.will.illinois.edu/keepinthefaith.

Of course a tower is built by starting from

a joint to earth with wet, gray gravel, and form

Orange steel is welded, riveted and made

and bricks are hoisted slowly up the side

Small children make towers in trees, and these,

though only made of rotting boards, still stand

as proudly strong (in the children’s eyes)

as those from which much older ones descend.

But both kinds of towers seem built to say

with their builders–we look down on the sky.

Steve wants you to know that we’re both important. He has his tower. I have mine. Steve is host of “Keepin’ the Faith,” a Sunday evening program on on WILL – archive programs, “including two with Gordon Stewar” (Steve ordered me to put this in here – he’s taller, so I do everything he says), can be heard anytime, anywhere @ www.will.illinois.edu/keepinthefaith

This morning Steve Shoemaker sent me his poem (see below this painting, “Christ after the Flagellation“) by Murillo. The “comments” below are a running conversation.  Chime in. 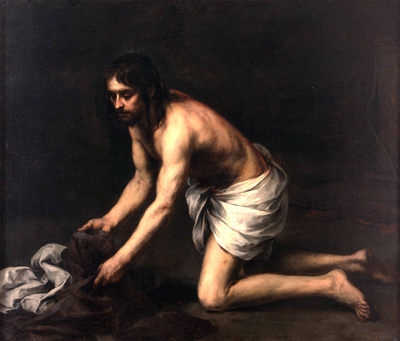 Christ after the Flagellation

The human had been tied to the whipping

times before by the Romans (and ages

earlier by the Greeks–but for a much

translucent (should it not have been darker,

with more blood?) His mother recalled his bris.

They had both cried then, too.

A strong young man, broad back, thick arms, now on

hands and knees, but head raised with eyes open:

seeing a cross that’s even worse ahead…

shame, even death (there is no sign of God.)

Steve was a classmate at McCormick Theological Seminary in Chicago. We’ve been friends for 47 years. A published poet, Steve was the Senior Minister of the McKinley Presbyterian Church and Director of the McKinley Foundation (campus ministry) at the University of Illinois for many years. He hosts “Keepin’ the Faith” on WILL, Illinois Public Radio, and lives in a geothermally-heated house on the prairie outside Urbana, IL where his neighbors often spot his kites riding the winds of the prairie skies.

Steve Shoemaker, host of “Keepin the Faith” (WILL/AM, Illinois Public Media) emailed this morning asking for thoughts about a post on “Protestants for the Common Good: ‘People of Faith Advancing Justice in Public Life'”: Can Christians Be Conservative? – an insiders’ academic debate among contemporary Christian theologian-ethicists. It’s worth a read. Tell me what you think.

Here’s what I wrote:

I’m not sure quite how to respond to the piece or the discussion. Off the top, I would say that Jesus himself didn’t neatly fit any of the four polar categories: conservative/liberal; reactionary/revolutionary. Even more, if the question whether the “authentic Christian” can be a conservative is more than a rhetorical question, it should be immediately dismissed – the question itself means that the answer has already been decided in the negative. Sort of like the question “Can anything good come out of Nazareth?!”

Greenfield’s take on Mark 1 is interesting, but, on first reading, it seems to me to miss the point that John the Baptist’s wilderness movement involved all four dimensions. It was conservative, liberal, reactionary, and revolutionary all at the same time. The trek to the Jordean wilderness was a reaction to the collusion between the local religious and political authorities (e.g. Vichy France?) and their Roman (e.g. Third Reich) occupiers. It was also a revolutionary call for a new social order, “the Kingdom of God is at hand; repent and believe the good news.” The grounds for that claim sprang out of the tradition that John and Jesus were conserving, while liberating it from captivity to the spirit of self-serving gains, idolatrous collaboration, self-righteousness and ethnocentrism. In short, the John-Jesus movement doesn’t fit nicely in any one or two categories.

Everywhere I look in the Gospels, I see a Jesus who doesn’t fit our categories. I still don’t know what to do with him.  “Can a Christian be conservative?” assumes from that outset that to be conservative is to be an “inauthentic” Christian. But even if one believes that conservative views and practices are inimical to the way of Jesus, there is the deeper question that puts that question in proper perspective: “Can a sinner be a Christian?” Only a sinner can be a disciple of Jesus. Some of the sinners and sins are primarily conservative, some liberal, some reactionary, and some revolutionary by disposition and by political persuasion. Most of us are some strange mixture of the four. So I would answer Larry’s question “Can Christian be conservative?” with “You betcha!”  How do I know?  Because it’s the wrong question. I don’t get to choose who is “authentically” Christian anymore than Jesus let his detractors decide.  Moreover, I know conservatives who call themselves Christian who put my stewardship and hands-on work with the poorest of the poor to shame. While I’m calling for the revolution, the conservatives I have in mind spend every Saturday preparing and serving meals at the homeless shelter and every Sunday afternoon after putting up with my sermons visiting people they know in town who are down and out – slipping them $100 bills so the utilities don’t get turned off – while I, having preached the revolution, go out for lunch and then go home for a nap.

William Stringfellow stops us all cold in our tracks with his criticism of the church:

For Stringfellow the gospel was the vitality of the Word-made-flesh among the principalities and powers of death in this world. None of us has a corner on that Word. One might say that for Stringfellow there is a fifth category that describes the authentic following of Jesus: the life of ‘resistance’ as articulated in An Ethic for Christians and Other Aliens in a Strange Land and The Politics of Spirituality, books uniquely addressed to the church in the American situation.

The question, it seems to me, is beyond ethics, and it is certainly beyond the false choice between the polar opposites: conservative/liberal; reactionary/revolutionary: Can or should a Christian be conservative, liberal, a reactionary, or a revolutionary? The ethics question rises from the theological-faith question: “Where today do we encounter the vitality of th e Word Made Flesh,and, in that encounter, who and how does God call us to be among the principalities and powers as the sinful, timid, confused, forgiven and redeemed disciples of Jesus

In terms of Christian ethics, as I see it, the answer, depending on the situation, involves all four dimensions supplemented by Stringfellow’s fifth descriptor.

I see elements of all five, for example, in Dietrich Bonhoeffer, who boldly conserved the tradition against the false interpretation of the German Third Reich and its ecclesiastical collaborators and paid the price with bodily resistance. Yes?  No? Maybe?

Look forward to hearing your comments.