Like Garry, I remember Eric Sevareid. I also remember Garry for his reporting from Vietnam during the Vietnam War.

Garry’s SERENDIPITY memory came to my attention this morning after a McCarthy type threatening comment appeared in response to Views from the Edge‘s post contrasting the character and behavior of Senator John McCain and the president who disdained him. Garry and I are the same generation. Our experiences are parallel. We both wear hearing aids, but we still believe our eyesight is as keen as it was when Joe McCarthy threatened a democratic republic. – Gordon C. Stewart, August 28, 2018.

This is one I never intended to share. It had been buried in the deepest part of the memory chest I never planned to revisit.

I grew up in an era when the name McCarthy was first associated with Edgar Bergen’s puppet pal,  Charlie McCarthy. We followed Bergen and McCarthy on their radio show, religiously, along with Jack Benny, Fred Allen, Bob Hope and the other funny people of a more innocent era.

All of that changed when “Tail Gunner Joe” McCarthy unleashed his witch hunt of everyone in the guise of ferreting out Communist sympathizers. It was part of a bleak period when Cold War angst followed World War 2. 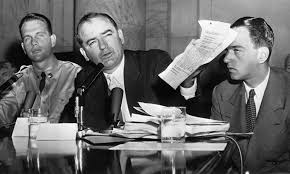 McCarthy is news again because of the current White House occupant and his apparent fondness for McCarthy’s tactics.

1 thought on “GROWING UP WITH McCARTHY – Garry Armstrong”