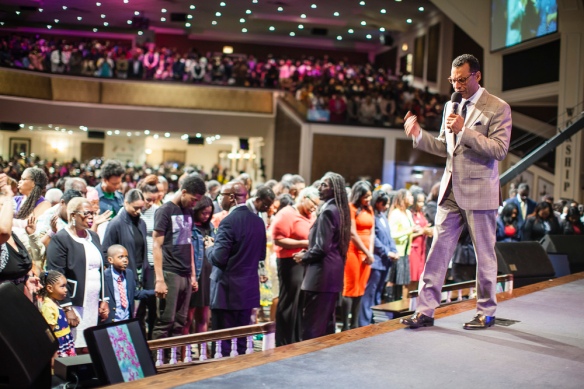 “Megachurch pastor resigns from Trump’s evangelical council” reads the headline in today’s Washington Post about the resignation of A.R. Bernard. Other council members are staying put for now.

The term ‘evangelical‘ is a hot word for folks like me from what were once called America’s ‘mainline churches“. We understand the gospel differently from our Christian sisters and brothers who claim the term and sit on the President’s evangelical advisory council.

Mainline Protestants were a majority of all Christians in the United States until the mid-20th century, but they now constitute a minority among Protestants. Mainline churches include the so-called Seven Sisters of American Protestantism—the United Methodist Church, the Evangelical Lutheran Church in America (not to be confused with Confessional Lutheranism), the Presbyterian Church (USA), the Episcopal Church, the American Baptist Churches, the United Church of Christ, and the Disciples of Christ—as well as the Quakers, Reformed Church in America, African Methodist Episcopal Church (AME) and other churches. – –  “Mainline Protestant” Wikipedia.

Among the differences between the evangelical churches and the mainline churches is the meaning of euangelion (the Greek New Testament word which translates into English as ‘good news’ or ‘gospel’).

From this writer’s perspective, the Good News/Gospel is the conquering of sin by the power of Love, the victory of love over hate, of compassion over cruelty, of oneness over division, of mercy over viciousness, of reconciliation over racism.

While the members of the President’s evangelical advisory council like Jerry Falwell, Jr. have stayed put, mainline church leaders like Herbert Nelson of the Presbyterian Church (USA) have stepped up with statements that fly beneath the attention of national publicity.

Here’s an excerpt from Herbert Nelson’s word to leaders of the Presbyterian Church (USA) in the aftermath of President’s remarks following the white nationalist, white supremacist nightmare in Charlelottesville, “Are we complicit in the racism of the alt-right?” (August 14, 2017) .

“Jesus reminds us in the gospel of John, “If you love me, you will keep my commandments. And I will ask the Father and he will give you another Advocate to be with you forever” (John 14:15–16).This word advocate comes from the Greek word advocare, which means to “stand beside or stand with.” Its connotation is akin to a lawyer standing beside a client. Jesus is preparing them to live a life in faith without his physical presence, while reminding them that the spiritual presence that guided him will still be with them; will stand beside them; will be an advocate for them. We use the words justice advocacy to explain the power of walking beside the victimized in our society. Racism represents a historic ill and victimization of people of color in this nation. It is a cancer in the soul of our country that can be driven out only by love. This love makes both the believer and nonbeliever uncomfortable, because it causes us to recognize that we can do more when we take our eyes off ourselves and place them on the Almighty.

“White supremacy will not be eradicated until faith leaders become willing to risk their very lives (professional and otherwise) for the sake of the gospel. The Scriptures remind us that “Whoever tries to keep their life will lose it, and whoever loses their life will preserve it” (Luke 17:33). Our denomination must be willing to lose its life for the sake of eradicating more than 400 years of white supremacy in the United States.

Perhaps today I may be forgiven for taking a little comfort — very little — in being part of a non-exceptional dying church that bears witness to the counter-narrative gospel in spite of itself.

8 thoughts on “Religion and Race in America”