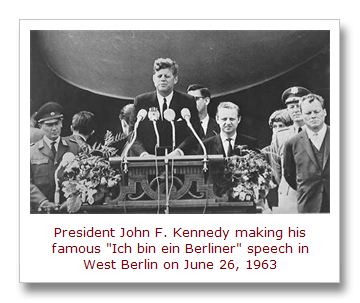 It was an American president who said it years ago standing in front of a wall that needed to come down. “I am a Berliner,” said John F. Kennedy.

Decades later another American president kept his words and his hands to himself when his German guest from Berlin, German Chancellor Andrea Merkel, asked,

“Do you want to have a handshake?”

The world frowned, remembering the student of American character Alexis de Tocqueville‘s observation. “When the past no longer enlightens the future, the spirit walks in darkness.”

Older Americans, recalling with pride the old president’s “handshake” at the wall, found ourselves speaking German.