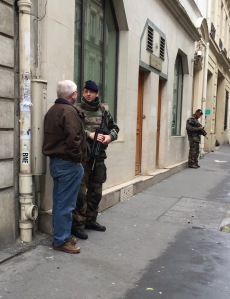 It’s Saturday morning. We’re standing in front of our apartment complex, waiting for arrival of an Uber car. Twenty feet to our left, two soldiers holding machine guns across their chests stand on either side of the entrance to the building next door. I decide to speak to the nearer soldier.

“Oui. Jews,” he says, pointing to the building behind him.

“Yes, a church for Jews,” he says. “Terrorists.” They’re protecting Jewish worshipers from a potential Islamist extremist attack on the synagogue on Shabbat.

A man walks by talking loudly to the air. He is obviously mentally disturbed and maybe into his cups or on something as well. “Crazy man!” says the soldier says, showing me the taser gun, which he carries in case “the crazy man causes trouble.”

What goes through the mind of a 20-something French soldier on a Paris street protecting the Jewish minority from Islamic extremists who have successfully attacked Paris? Why does he think America is patriotic? Is he thinking of an American businessman who has captured the news in Europe by promising to make America great again by closing the borders to Muslims and building a wall against immigrants, returning America to the real Americans?

Anti-immigrant sentiment is not new to France. It has fed the political right in recent years. No one knows what the young soldier thinks. I like him. He seems to like me. Whatever the answer may be to what goes on in his head and heart, we’re dealing with the same world and the same issues. But I do wonder whether he might think that French patriotism would mean taking his country back from those who are not really French?

And who might the really French or the real Americans be?

8 thoughts on “Impressions of Paris 3”