Yesterday’s Christ the King Sunday sermon by Rev. Anne Miner-Pearson on John 18:33-37 at Trinity Episcopal Church in Excelsior deserves a greater audience. We’re pleased to publish it on Views from the Edge.

“Testify to the Truth” 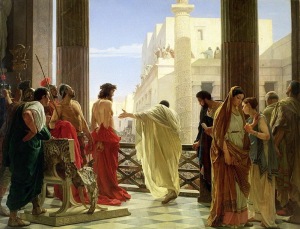 Pilate and Jesus are an odd couple. We usually meet them in Holy Week when their conversation is part of Jesus’ journey to his crucifixion. Because Good Friday and the cross are looming closer and larger, we pause only briefly in Pilate’s headquarters. But today is Christ the King Sunday and we encounter this odd couple under different circumstances. We are on the cusp of the Church year – the end of 52 Sundays facing into Sunday, Advent I, awaiting God’s move to enter human flesh as Jesus, beginning his life in birth like us, and ending his life in death like us.

Yet, before our church year begins, tradition asks us to pause and hold on to the bigger story of Jesus. There is a larger and more eternal back-story to the one that opens with shepherds, a star, some straw in a manger and even Mary. There is another birth story in John’s gospel and we enter toward the end as Pilate and Jesus talk. What an unlikely conversation it is. Pilate, Pontius Pilate, the 5th prefect of the Roman province of Judaea calls – no, “summons” – an accused religious heretic to his headquarters. Pilate has already questioned the Jewish leaders and could be done with the matter. Undoubtedly, he has more important issues awaiting his attention than dealing with the process leading to a crucifixion. They happen all the time and aren’t on his radar.

So, they are an odd couple. A man with impeccable Roman familial and political credentials, Pilate stands in expensive robes, perfumed and fresh from his morning bath. Jesus’ home address is Nazareth. His profession listed as carpenter. His clothing hardly deserve the name – practically rags after the torture and stripping, smelly from sweat and blood. But Jesus is no country bumpkin. He knows at least 4 languages – Aramaic, Hebrew, Greek and the Latin he uses with Pilate. However, Jesus’ linguistic skills don’t make him a king. Yet, that is the direction the conversation goes.

“Are you the king of the Jews?”, Pilate begins, a question Jesus later returns to. “My kingdom is not from this world.”, Jesus answers. “So you are a king?”, Pilate inquires. With that question, Pilate introduces what makes him and Jesus the oddest pair. They are both “kings”, but the descriptions are polar opposites: Power-Love, Higher-Lower, Divided-One, Hold on-Give away, Boundaried-Open, Petty-Generous, Unjust-Just, Manipulating- Embracing, Triumphant-Humble.

Yet, Jesus, without actually answering, takes the title of “king” in a whole different direction. “For this I was born, and for this I came into the world, to testify to the truth.” Here Jesus tells his own “nativity” story, but remember, this is John’s gospel. To understand what Jesus is saying to Pilate as his earthly life is about to end, we have to go back to the beginning, way back to the beginning to understand Jesus’ kind of king.

Jesus understands himself as king and where his kingdom is from radically different. Pilate doesn’t get it. The crowds don’t get it. Even Jesus’ close disciples haven’t gotten it yet. In that humble peasant, from the virgin womb of Mary, God entered the world, breaking through all categories, possibilities and imaginings. The Word of God who first spoke all creation and universes into being now has spoken again. A second holy Word took form but this time the birth came as God was and is willing to become empty. The apostle Paul captures it in the mystical hymn in Philippians: “…thought he was in the form of God, did not regard equality with God… but emptied himself, … being born in human likeness.” Jesus’ kingdom is not from this world, but in this world, grounded in and flowing from the eternal God, what we now call the Trinity: God, Creator, God, Christ, and God, Spirit.

It’s like when God birthed the created worlds, God already had another birth in mind. God’s Word would speak another creation. The Spirit Breath who give human life and form from the dust was not finished. The Trinity was not complete until the human experience could join in the circle, the abundant, ever-flowing Love. And now God’s experience in human form nears the end, the pain and suffering of crucifixion.

But, ponder this thought by a contemporary mystic, Bernadette Roberts. Maybe the hardest thing for Jesus was not the crucifixion, but the incarnation – to leave the circle and connection of Love to learn and teach how to hold on to and live in that flow of Love caught in bodily form. And we can picture that Circle, can’t we, the world of Christ the King, the kingdom Jesus is from. It’s the picture we see on the icon of the Trinity by Rublev. 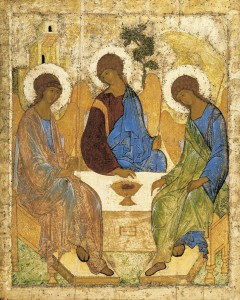 We all know it – the beloved the one we take with us on vacation and hold up for photos on Facebook. I brought my personal one this morning and it’s on the altar. It was “written” in 2000, (the verb used when making an icon) by Eugenia. At that time, she was imprisoned in the largest women’s prison in Europe, outside of St Petersburg, Russia. Her crime was counterfeiting. However, Father Nicolai, pastor to the prison, thought her counterfeiting skills could be redeemed. Released under Father Nicolai’s watch, Eugenia was taught icon “writing” to help support her 3 daughters. Before she paints the copy of an icon, Eugenia goes through all the traditional rituals, including prayer and fasting.

Through the vision of a monk on Mount Athos, Greece, around 1260, and the hand and heart of an alcoholic felon, we see the “dance of the Trinity” – gathering in communion, gazing in a circle of love, pouring out within and beyond that Love to all creation. Given the three figures dominating the scene in their bright robes and adoring gazes, perhaps you have missed a small detail in the icon. I have. It was just pointed out to me recently. It’s under the table, a small brown box.

An ancient story about the the Rublev icon is that originally there was a mirror on top of the box. So, as one sits in front the icon and ponders the kingdom of God, the Trinity, one is able to see oneself as the fourth figure in the circle, at the table, in the flowing love always moving, expanding, tumbling out to all creation, in all time. From the beginning, God envisioned a fourth place in the Love.

Jesus said, “For this I was born, and for this I came into the world, to testify to the truth.” “Pilate asked him, ‘What is truth?'” Jesus spoke no answer that day. His life was and is the answer. The truth Jesus lived and died is that each of us, Eugenia, Pilate, all people have a place at God’s Table, in God’s heart, in Christ the King’s kingdom. Our response is to see ourselves in the mirror and claim our place. Amen.

2 thoughts on “Sermon: Testify to the Truth”