The Ongoing Saga of Cain and Abel 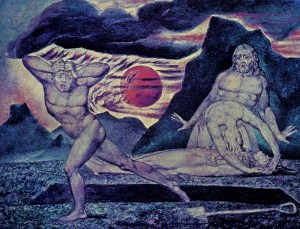 Religion and politics: oil and water? The problem is that each stakes a claim for the same turf. They both answer the question of how we live together. The fact that religious creeds and political creeds stake claims to leads some of us to separate them, not only as they are separated by the U.S. Constitution, but by carving out different spaces on the same turf: one private/personal sphere (religion), the other public/social sphere (politics). Religion says to politics: Keep your hands off my private beliefs! Politics says to religion: Keep your hands off public policy!

With the exception of adherents of the extreme right or left in religion or politics, most of us have had enough of religious or political fundamentalism. We’re tired of explosive tirades and single-issue politics whose test-tube is organized religion. We’re equally tired of political power plays that dress up a political party (take your choice) as the incarnation of righteousness.

The U.S. Constitution does a good thing when it insists that there be no established religion in this country. Looking back on the failed experiment of the Massachusetts Bay Colony’s blending of religious creed and political authority that resulted in the banishment of dissident Anne Hutchinson (1637), the execution of Quaker Mary Dyer, and the Salem witch trials, the framers of our Constitution had every reason to protect the body politic from the tyranny of any religious majority.

Faith, a vision of the peaceable society

But even as I celebrate the anti-establishment provision of the Constitution, there is no way to separate faith and politics. It’s impossible because faith is about more than the private/personal sphere — it’s a vision of the peaceable society. Faith and politics live in the same territory every time the vexing questions appear regarding the public/social/economic/military ideas and beliefs that create public policy for good or for ill.

The three Abrahamic religions — Judaism, Islam, and Christianity — answer Yes to the question “Am I my brother’s/sister’s keeper?” Our three traditions refuse to confine religion to the vertical and the private. Faith is a living relationship with the Divine that expresses itself, according to Amos, Jesus, and Muhammad, primarily in the daily practice of keeping or caring for the neighbor. Jewish, Christian and Islamic faiths are social as well as personal, public as well as private. While alms-giving and charitable giving are essential, they count for little without also addressing the public policies that set the fires that drive people into the arms of charity. The Cain and Abel story strikes me as a place to anchor the discussion. In the biblical story, Cain (‘kayin’ which means ‘Get’ in Hebrew) is humanity’s first child East of Eden. When Cain kills his young brother Abel (‘puff’ or ‘vapor’ in Hebrew), YHWH asks Cain where his brother is. Cain answers with a crafty question that still echoes down the centuries with war and bloodshed and religious hatred: “I don’t know. Am I my brother’s keeper?”

A call from the NRA

While concentrating on the Cain and Abel story last Monday, my phone rang. The little window on the phone said “NRA.” “Mr. Stewart?” “Yes.” “I’m calling for Ronald Schmeits, president of the National Rifle Association, to invite you participate in a survey with one simple question. It will take just a minute of your time. Mr. Schmeits has an important message. When the message is finished, Mr. Schmeits’ assistant will come on the line for the one-answer survey.”

The message went something like this: “Right now the United Nations is meeting behind closed doors planning to ban all guns everywhere in the world. Even as I speak, they’re planning behind closed doors to take away your freedom in this country. The United States is a sovereign country. We cannot allow a bunch of banana republic dictators to take away the American people’s freedom to bear arms. If we let them succeed, it will be the end of the Second Amendment and the end of freedom in our own country.” Mr. Schmeits’ assistant came on the line to pose the survey’s one “simple” question: “Mr. Stewart, do you think we should allow the United Nations and a bunch of banana republic dictators to take away our freedom? ”

“Yes, sir, you’re in our data base either as an NRA member, contributor, or as someone who believes in the civil liberties.”

“So, Mr. Stewart, would you like to answer the question?”

“Are you serious?! You want me to answer a question that has only one answer, a question premised on demagoguery, fear and lies? Give me a break.”

“You’ve had your break! Have a nice day, Mr. Stewart!”

At that point I wished I’d had a gun. In the name of Abel and all things good, I was becoming Cain.

The work of all religion and politics

YHWH tells an angry Cain in the Genesis story that “sin is crouching at the door, and its urging is for you. But you must master it.” It is the human leaning toward violence that humanity must overcome.

The story of humankind is Cain’s story, the refusal of this mastery. The long sweep of human history is the story of slaying the brother because we have not mastered the beast that crouches inside ourselves. “I am not my brother’s/sister’s keeper.” The sin — i.e. the refusal to take responsibility, the rebellion of separation and of slaying that from which we cannot be separated — goes un-mastered and slays the brother. It comes hurling down the centuries of human development as a rock, a caveman’s club, a sling shot, a rifle, a handgun, a Bazooka, an M-15, an airplane turned into a missile, a drone that kills innocent civilians whose blood, as in the Genesis story, “is crying out to Me (YHWH) from the ground.” Abel’s blood is the ink in which our story is written. Cain’s story sets the stage for the work of all religion and politics worthy of their callings. It is the real story of the Fall from grace held in common by Christians, Jews, and Muslims. It also holds the key to re-writing the story, not by claiming innocence, but by taking responsibility for a violent world.

For faith and for politics alike there is one over-riding question: Am I my brother’s keeper? Or will I insist on the right to slay him? Am I willing to take responsibility for my neighbor, to master the urge to violence that crouches at my door? Do my religion and my politics slay or keep my brother/my sister from deadly harm?

Are we willing to re-claim the Earth as sacred turf — through responsible religion and responsible politics — so that the voice of Abel’s blood no longer cries out from the ground to a horrified God?