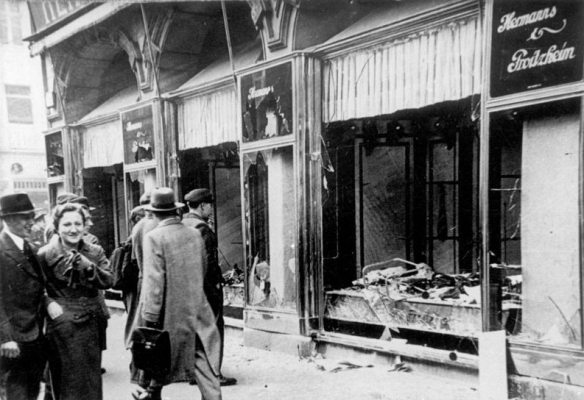 Today marks the 80th anniversary of The Night of Broken Glass (Kristallnacht).

The smiling man and woman in the photo are strolling past the broken glass of raided shops of the Jewish shopkeepers in the otherwise tranquil city of Magdeburg, Germany. The passers-by likely have never heard of Mechtild of Magdeburg, the 13th Century mystic beguine who had declared that “No one can burn the truth,” nor had they heard the screams or seen the tears of the shopkeepers or synagogue worshipers. Those screams are silent now. (Scroll down for information on  Krystallnacht, The Night of Broken Glass.)

Like the synagogues of Germany, Austria, and the Sudetenland, the Tree of Life Synagogue in Pittsburgh had been a quiet place. The sound of broken glass were heard only during from the traditional breaking of a glass at Jewish weddings. Tree of Life was a sacred place of worship. But the memory of Kristallnacht and the long history of anti-Semitic pograms were, and are, never far away.

The 80th anniversary of Kristallnacht deserves greater attention in the U.S.A. this year when the evil of white nationalism has shattered the glass of the ‘others’ in synagogues, churches, and public gathering places with the weapons of destruction. Today I hear the echoes from The Night of Broken Glass and see the faces of smiling passers-by.  I stand still again in the face of evil and bow my knee before the Eternal Silence of the compassionate God we cannot kill.

On the night of November 9, 1938, violent anti-Jewish demonstrations broke out across Germany, Austria, and the Sudetenland region of Czechoslovakia. Nazi officials depicted the riots as justified reactions to the assassination of German foreign official Ernst vom Rath, who had been shot two days earlier by Herschel Grynszpan, a 17-year old Polish Jew distraught over the deportation of his family from Germany.

Over the next 48 hours, violent mobs, spurred by antisemitic exhortations from Nazi officials, destroyed hundreds of synagogues, burning or desecrating Jewish religious artifacts along the way. Acting on orders from Gestapo headquarters, police officers and firefighters did nothing to prevent the destruction. All told, approximately 7,500 Jewish-owned businesses, homes, and schools were plundered, and 91 Jews were murdered. An additional 30,000 Jewish men were arrested and sent to concentration camps. Nazi officials immediately claimed that the Jews themselves were to blame for the riots, and a fine of one billion reichsmarks (about $400 million at 1938 rates) was imposed on the German Jewish community.

The Nazis came to call the event Kristallnacht (“Crystal Night,” or, “The Night of Broken Glass”), referring to the thousands of shattered windows that littered the streets afterwards, but the euphemism does not convey the full brutality of the event. Kristallnacht was a turning point in the history of the Third Reich, marking the shift from antisemitic rhetoric and legislation to the violent, aggressive anti-Jewish measures that would culminate with the Holocaust.