A kite flying above the Illinois prairie invites the viewer to hear the Sound of Silence. 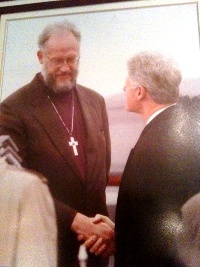 Steve Shoemaker, the 6’8″ kite-flying poet whose poetry blessed Views from the Edge readers, shared this photo from the Shoemaker prairie home near Urbana, Illinois in 2014.

Steve didn’t live to see the changing of the guard one year ago today. On the anniversary of the 2017 inauguration, pancreatic cancer has silenced Steve’s Views from the Edge posts, but his poetry and “Visual Poetry,” as he called this photograph, still speak clearly. Like the kite in the photograph and the photo of Steve towering over President Bill Clinton, Steve still invites us to “go fly a kite” for a better time. RIP.