Click HERE and then click the audio link on the Minnesota Public Radio website to hear yesterday’s commentary on the classical spiritual-philosophical-ethical premise we need to remember. This piece was written two days BEFORE the President delivered his speech yesterday at Knox College. 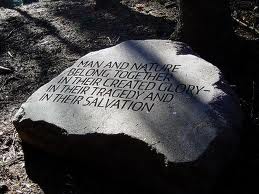 Today President Obama began a series of speeches about the future of the American economy. I hope he takes us back to the basics of what an “economy” is.

Economics is about a household and how to manage it. The household is a family, a state, a nation, a planet.

In America and elsewhere across the world, we are coming to realize that the planet itself is one house. What happens in one room of the house – one family, one city, one nation – affects what happens everywhere in the house. Paul Tillich caught the clear sense of it when he wrote that “Man and nature belong together in their created glory – in their tragedy and in their salvation.” That is to say, there is only one house.

The essential question of economics is not about systems – capitalism, communism, socialism, or something else. The essential question is spiritual, philosophical, and ethical. It’s whether we believe that there is only one oikos, one house; the subsequent question is about how best to manage it for the wellbeing of all its residents and the fragile web of nature without which the house of the living would not exist.

Very often what we call ‘economics’ is not economics. It’s not oikonomia. It’s something else. It assumes something else, and when we forget what an economy and economics really are, we enshrine greed as the essential virtue, ignoring and imperiling everyone else and everthing in the one house in which we all live.

I dream that the President will preach the old Greek common sense: that in his own way, he will reclaim the essential premise of an economy and the ethical task of economics. By bringing the Greek origins to our television sets, headsets, and iPads, he can call us to move forward out of the partisan houses of nonsense.

There is only one house.