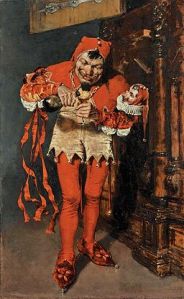 The kingdoms of former times were ruled by kings. The kings appointed court jesters who acted the fool to bring the king pleasure and keep him honest. Some of the kings were what Rex Tillerson called the king, but, for the most part, those who were loyal kept the secret as best they could. Even the kings who were clinically insane didn’t confuse their roles with the jester’s. They knew who was king. They left it to the jesters to play the fool. They knew the difference between governing and entertaining. Throughout history, however, there were kings who may have been as entertaining as their court jesters, and there were kings who were insane, but they never had television cameras.

King Charles VI of France (1368–1422) became known as Charles le Fou (Charles the Mad) for a strange psychosis that included the medical diagnosis “glass delusion.” Crossing the forest in Le Mans, King Charles VI mistook his protectors for enemies and attacked them with his sword.

And there was King George III (see above), remembered for losing American colonies midway through his reign (1760–1820), alternating between eruptions of volcanic rage and sinking into panic attacks, delusions and visual and auditory hallucinations.

None of these kings had a television to assure him he was not about to shatter like a broken glass. None of them had Fox News applauding pantomimes of physically challenged reporters or terrified women who claimed sexual abuse. Nor did any of the kings have to wonder what to do when their favorite TV station no longer covered every rally after their Neilsen Ratings dropped.

Schedule a Thursday lunch with Kanye West and invite the White House press corps for the live, not to be missed, impromptu Oval Office visit with Kanye. But first, go on the road to Erie. Hold a rally. Pack the house with loyal subjects. Do the old campaign schtick. Attack the wicked pretender to the throne: “Lock her up! Lock her up! Crooked Hillary!” Ramp up the act. Make faces. Poke fun at the terrified woman whose story had stolen the spotlight. Bring the ratings back. Play the jester and the king. Prove to Fox you’re still entertaining.

The house in Erie isn’t packed. The schtick is old. But there’s always tomorrow’s photo op with the court jester he can count on to assure him he’s not a glass about to shatter. The Oval Office is packed! The king sits behind his desk for a little entertainment. Kanye is bizarre. Ludicrous. Off the wall. Delusional. Clearly not well.

Which was worse — the Wednesday campaign rally in Erie or Thursday’s intimate moment with the jester on steroids — is hard to say. Both lent credence to Rex Tillerson’s alleged demeaning slur. Mad King Donald — Donald the Mad — made a fool of himself.