It was only a matter of time. Its girth was huge — much too big to get our arms around. Its top had fallen off. What remained was filled with gaping holes, but still standing at the southwest edge of the land with the cabin by the wetland.

The tree had stood here decades before we imagined ourselves to be its owners last August. We paid good money to buy the property, including the naked tree that had not yet fallen. It was only a matter of time before it fell. It concerned us that it would topple on someone playing on the back of the yard — Barclay, the canine member of the family, one of the grandchildren, or the grounds-keeper who comes by every three weeks — but not enough to take it down. It continued to stand there with a still attached heavy limb causing it to lean slightly toward he east. It would fall of its own weight or by a lightning strike in due time. 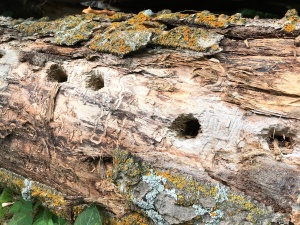 Tom, the Mennonite grounds-keeper, found the upper parts of the dead tree on the lawn last week while we were away. Its five-feet girth logs now serve as a barrier between the woods and the open space where the cabin sits. There’s no one left to remember how old the tree was, and what remains of it is too rotten to identify the rings. But the fallen tree that once fed the pileated woodpeckers continues to serve the community as a grocery for ground-feeding birds and other animals that feast on the termites and carpenter ants that once drew the woodpeckers.

2 thoughts on “No one owns a woodpecker!”