Visiting St. John’s Abbey for the first time years ago just before noon, one of the Benedictine monks invited the guest to join the monks for mid-day prayer.

Moments after declining the offer, I changed my mind. Risking the embarrassment of unfamiliarity with the Benedictine rite, I quietly made my way up the right side aisle toward the Chancel choir loft where the monks were gathering. 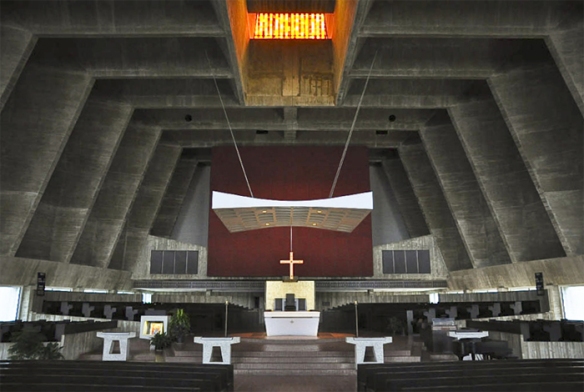 Anxious and wanting to be as invisible as possible, I slid up the steps of the choir loft like a cockroach and found a suitable hiding place, the seat in the far corner of the top row (far right in the photograph).

I felt a tug on my left shirt sleeve. “I don’t think you want to sit there,” said the kindly Benedictine Brother with a twinkling eye, “unless you want to be the Abbot!”

Any early childhood protestant prejudice that monasteries are places where people of lesser faith go to hide came tumbling down! There is no hiding place in a Benedictine monastery. No one is a cockroach.

During a crisis years later, I returned to St. john’s for spiritual guidance and took a more lowly place in the choir loft.

2 thoughts on “The Hiding Place”