Elijah doesn’t like being confined. He’s screaming for release from his swaddle!

Maybe Elijah already knows about Martin Sostre held in solitary confinement at Clinton Correctional Facility in Dannemora, New York, and the warden who allowed him only one hour of freedom in the prison yard . . . or about the 2016 prison revolt when the Dannemora inmates refused to return to their cells from the exercise yard.

“Mom! Stop acting acting like a warden! I love to drink and stuff… but I’m not a fetus anymore! I need some exercise! And stop calling me Elijah; my name is Martin!”

Perhaps the swaddle is to little Elijah’s mind what solitary confinement was to the protesting Martin: a violation of the human rights to the free exercise of speech and bodily movement for the purpose of allowing the warden . . .  or the Mom . . .  to sleep securely through the night.

But there’s a big difference between the two. When Martin Sostre made a lot of noise, Marin was confined to his swaddle while the warden slept soundly miles away.  When Elijah – or is it Martin? – protests every hour or so through the night –“Mom! I’m not a fetus anymore!”– his mother is crying in the same cell. 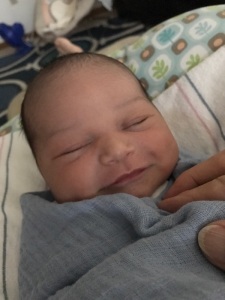 This morning their roles have switched. Elijah’s sleepless mother is a weary protester; the well-fed rioter is sleeping happily in his swaddle.