Artists often say it best. Jacopo da Pontormo‘s painting of the peaceful Christ rising above “the guards who shook and became like dead men” (see text below) invites us this Easter to ponder afresh Christ’s hidden reign in the world in which violence, militarism, and imperial ambitions still feign to rule. 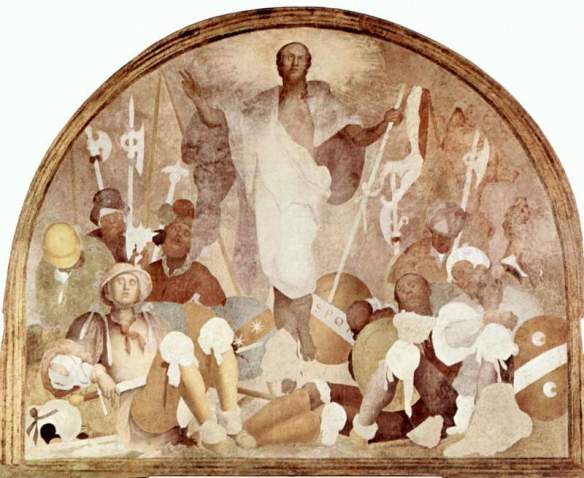 For fear of him the guards shook and became like dead men. But the angel said to the women, “Do not be afraid; I know that you are looking for Jesus who was crucified. He is not here; for he has been raised, as he said. Come, see the place where he lay. Then go quickly and tell his disciples, ‘He has been raised from the dead,and indeed he is going ahead of you to Galilee; there you will see him.’ This is my message for you.” So they left the tomb quickly with fear and great joy, and ran to tell his disciples. Suddenly Jesus met them and said, “Greetings!” And they came to him, took hold of his feet, and worshiped him. Then Jesus said to them, “Do not be afraid; go and tell my brothers to go to Galilee; there they will see me”  [Gospel according to Matthew 28:4-10]