Between services the Trinity community will come together in a joyful parade, with music, laughter, and bubbles! Unfortunately, the donkey that was going to lead us is being a bit stubborn so he will not be with us. 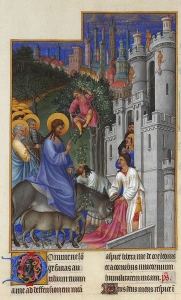 Perhaps today’s cancellation serves as a reminder that the donkey is stubborn by nature, and that, if you manage to tame one, there will always be another nearby waiting to take its place.

Some churches today celebrate only Palm Sunday – “the Triumphal Entry” into Jerusalem. It’s all about palm-waving and “Hosannas!” shouted and sung to the victorious King of kings and Lord of lords.

Other churches honor the paradox of palms and fists, stubborness and spears, appearance and reality: the king who refused to be King who rode an ass (or two) into the city that wanted something more than the mortal it could raise on a cross.

Today there will be no donkey on the streets of Excelsior. The donkey is just being stubborn. Or perhaps it refuses to participate in this year’s re-enactment when palms and hosannas take her rider to the cross again in a world where asses still rule.

5 thoughts on “The Stubborn Donkey and the Asses”