Uncle John claimed we Andrews descended from John Alden of the Mayflower. He spent many years, day after day, doing the research that confirmed what every Yankee wants to find: a connection to the true Americans. You know. The ones who came across on the Mayflower. The ones with funny hats who murdered the Americans who were already here. The ones who make their descendants “blue bloods”.

I always wondered, though, why such an important family as John Alden’s would live in South Paris, Maine where Mark Twain, had he known about the place, would have said of it what he wrote about Cincinnati: “When the end of the world comes, I want to be in Cincinnati. It’s always ten years behind the times.”

When I think of South Paris an eerie feeling sweeps over me. A kind of despair. I feel forlorn.

I went back to South Paris for my Aunt Gertrude’s memorial service. As always, I wondered why people chose to live there. My cousins grew up there. Most of them couldn’t wait to leave and did as soon as they could, and never looked back. I wondered why the others stayed. But even more, I’ve wondered why our forebears went there at all, being especially important blue bloods like the family of John Alden of the Mayflower.

The Andrews didn’t start out in South Paris, though. They settled a few miles away, before South Paris existed, in the pristine foothills of the White Mountains on wooded land with a trout streams over which they would build a red covered bridge and a paddle wheel sawmill to mill the lumber for things like caskets. The Andrews Casket Company and Funeral Home became a staple of the hamlet, the famed institution of an entrepreneurial Baptist minister, John Alden’s descendant, Isaac Andrews. The property remained in the family for over 200 years until my mother’s favorite cousin Lynwood (“Pete”) Andrews sold his home, the casket company, and the funeral home, along with the land it to some whippersnapper several years ago.

A smile always came across my mother’s face whenever she told us of playing hide-’n-seek with her siblings, Gertrude, John, Elwood, and Roy in the casket room of the original Andrews homestead in Woodstock. Imagine hiding in a casket. Maybe everyone in those woods had come there to hide from death, running from the haunting memory of the murders that followed their landing at Plymouth Rock where they once had “no property or position, no wealth, no fame, or profession, no beauties seen now or then, but … managed to have children.”*

As a child my mother and I often visited Grandpa Andrews, my great grandfather, who still lived on the original Andrews property with the casket factory, the trout stream, the red covered bridge, the mill, the funeral home, and the family home. By the time I came along, he was infirm, cared for by his live-in housekeeper. Angie was a sweet woman who dearly loved Grandpa Andrews. Angie made the best buttermilk biscuits anyone had ever tasted; no one could duplicate them, even with the recipe she shared. My mother always suspected there was a secret ingredient missing from the public recipe. There was a wink-wink when anyone spoke of Angie as the housekeeper. She was known for her biscuits. The rest was nobody’s business.

I was three and four years old when my mother and I lived in South Paris and made the visits to Grandpa Andrews. It was during the Second World War. My father was overseas in the South Pacific. Even then, I sensed the smell of death, knowing in my bones that one of the caskets in the casket room might be waiting for my father. Way back then I could smell the forlornness in the air.

Sixty years later, when I returned to Maine for my Aunt Gertrude memorial service at the Congregational Church of South Paris, I looked out at the congregation and wondered who they were and why they were in Oxford County, the poorest county in the State of Maine.

Two days before doing my Aunt’s service, I was on my way to the Mollyockett near the old Andrews homestead in Woodstock when, a mile or so before my destination – it was a Sunday – I saw a sign for whole belly fried clams. I love fried clams. We don’t get those in Minnesota. I pulled into the parking lot. A man whose home shared the driveway to the little restaurant was standing outside. “Can I help ya?” he asked. “Well, I don’t know. I saw the sign for fried clams,” I said, “but it looks like it’s closed.” “Well, it’s Sunday,” he said. “Where ya from? “Minnesota. We don’t get whole bellied fried clams in Minnesota.” “Wait right here,” he said. We’ll open up. Let me go in and get the Mrs.”

Inside the restaurant he asks where I’m from and what brings me to these parts. “I’m here for a funeral. I’m staying at the Mollyockett,” I said.

“You must be here for Pete’s funeral.”

“Pete died? No, I’m here for my Aunt Gertrude’s service. She was Pete’s first cousin, and my mother’s favorite cousin. Pete died?”

“Gorry, he said. “I thought it was a little early. He just died yesterday, wasn’t it, Mabel? It was Saturday, right, Mabel? I thought you was here for Pete’s funeral. See that dollar bill up there? That’s from Pete. Our first customer. We’d just moved here from Rhode Island. Real gentleman, that Pete. Always had a different lady with him, a real ladies’ man, but always a gentleman. Always wore a white shirt and tie.”

I wonder if Pete carried the forlornness of the children of John Alden and the Mayflower, running from a murderous ancestral history he couldn’t identify, trying to resolve it playing among the caskets with my mother, or eating fried clams with the ladies, always the gentleman, just like Isaac Andrews, his grandfather, and all the other Aldens before him. Forlorn and wondering why.

*Quoted from Steve Shoemaker’s verse on the Mayflower posted last on Views from the Edge.

Click HERE for the link to “When the heart is awash in memory, it’s easy to forget,” the humorous walk-down-memory-lane commentary published today by Minnesota Public Radio. Thank you, MPR

Here’s a photograph of the Andrews Casket Company mill and “trout stream” in Woodstock, ME, the homestead of the Andrews family where Pete was the last Andrews to make his home. 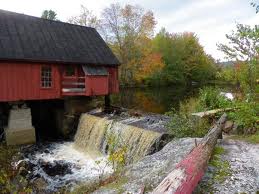 The Andrews Mill in Woodstock, Maine

My great-great-great-grandfather Isaac Andrews founded the Andrews Casket Company and Funeral Home next to the trout stream in Woodstock, Maine more than 250 years ago. Isaac was a minister.Because there was no carpenter in town, he not only stood at the graves. He built pine boxes for those he buried.

Over the course of time, the simple boxes became the caskets of the Andrews Casket Company and Funeral Home. You might say Isaac had a monopoly in those Maine woods.

Only recently did the Andrews property leave the family when Pete Andrews, my late mother’s favorite cousin, sold it to some whippersnapper who just wanted to make a buck.

My mother used to chuckle as she recalled playing hide-and-seek with her siblings in and among the caskets at the casket factory. The land, the mill, the old homestead,the funeral home and the trout stream that had belonged to the family all those years belongs to someone new…which means that it, like Garrison Keillor’s fictional “Lake Woebegone,” never really did belong to us and does not belong to them. It does not belong to time.

Last October my brother Bob and I stood with my cousins at the open grave of my 99 year-old Aunt Gertrude – our one remaining Andrews elders. I recited from The Book of Common Worship the prayer I have prayed a thousand times at the open grave, the one my classmate Steve and I learned as young, naive pastors, a prayer for the living that feeds me day and nigh until the lights go out. I wonder if Isaac Andrews did the same way back when.

“O Lord, support us all the day long until the shadows lengthen, and the evening comes, and the busy world is hushed, and the fever of life is over, and our work is done. Then, in your mercy, grant us a safe lodging and peace at the last.”

Here’s the poem from Steve from a few days ago that inspired the above reflection.

When I was just a young and naive pastor,
an old man in the congregation
would always arrive long before the rest
of the people at the grave site. He’d shun
the funeral, but haunt the cemetery…
Standing by the open grave, he’d state
his opinion of the deceased and share
with me the type, style and brand of casket
he’d told his wife he wanted when he died.
As the morticians say, he “predeceased”
his spouse, and when we met to plan, she tried
to grant his wishes to the very last
She blessed their common gravestone with her tears,
but smiled through life for many happy years.

Like the widow of the man who loved graves, I smile through tears for all the years, and I take ancestral solace in knowing that I don’t really “own” a thing.