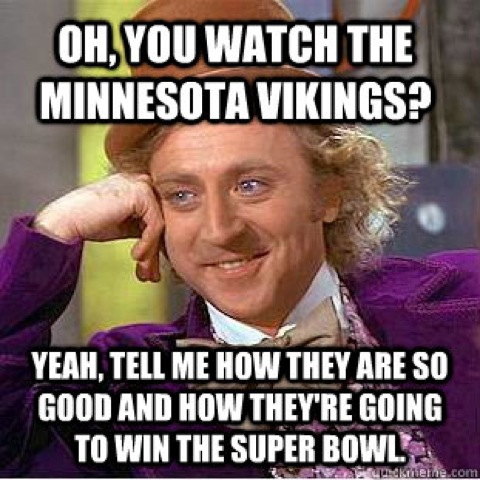 We’re not going to the Super Bowl — again — this year. But there’s a mostly proud and wonky history here in Minnesota. In politics, think Hubert Humphrey, Floyd V. Olsen, Walter Mondale, Gene McCarthy, Jesse Ventura, Michelle Bachmann, Al Franken, and Amy Klobuchar. In sports, think the Minneapolis Lakers and the North Stars before they left the Land of 10,000 Lakes to become bigger fish in Dallas and L.A., Harmon Killebrew, Jim Kaat, Kirby Puckett, Rod Carew, Kevin Garnett, Paul Molitor . . .  and last, but by no means least, remember the name Minnesotans are still trying to forget: Shawn Chambers who gave up one of the most famous goals in all of hockey history in game two of the Stanley Cup Finals in 1991.

After the Minnesota Vikings did a Shawn Chambers in the NFC Conference Championship game that would have put them in the Super Bowl, I remembered Gene Wilder’s mocking Green Bay Packers’ grin and heard his Packers taunt.

I’m a Philadelphian transplanted in Minnesota, still learning how the game is played here. I love my adopted State and today I’m still a little grumpy about the loss to the Eagles and having to be nice to them.

Although it will be the the Eagles who will fly into Minneapolis for the Super Bowl we Minnesotan thought belonged to us, I have no desire to return to my native Philadelphia.

Nope! In an hour or two, I’ll head north to the cabin. No ice hockey. No ice fishing. No football. No TV. No cell phone. No internet. Just a warm fire and a book in the woods next to the wetland where the eagles soar and the owl perches in the oak tree, reminding me that I’m dust and to dust I shall return.

8 thoughts on “Let Down in Minnesota”