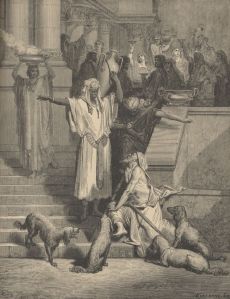 Gustave Dore print of Lazarus and the rich man. (1890)

Jesus told a parable about a man with a name ‘Lazarus’ – a poor man – and a man who has no name – “a rich man”. The parable begins like this:

“There was a rich man who was dressed in purple and fine linen and who feasted sumptuously every day. And at his gate lay a poor man named Lazarus, covered with sores, who longed to satisfy his hunger with what fell from the rich man’s table; even the dogs would come and lick his sores.” [Luke 16:19-20 NRSV]

The scene then shifts from the difference between their earthly circumstances to the imagined differences between their circumstances in an afterlife. Lazarus is soothed in the bosom of Abraham. The rich man is in torment, pleading that if only he had known, he would have lived differently. He asks Abraham to send Lazarus to his five brothers to warn them. tell his living relatives. If he can come back to them from the dead, they will understand, change their ways, and avoid the coming judgment.

Jesus’ parable is not about the dead. It’s about the living. About how are to live together as neighbors. It’s about waking up to destitution and privilege and heeding the parable’s calling to a society beyond these extremes, a society known for its compassion.

Ask your friends to discuss the news in light of Moses’ response to the rich man. Ask your pastor, priest, or minister how she or he connects the dots with the news in 2016. Ask yourself the question as you listen to the morning and evening news. Ask yourself whether you’re getting the parable or whether the parable got you. Ask God for guidance, for mercy, for change, for transformation of a world of us and them. And give thanks for Jesus, Moses, and the prophets.

2 thoughts on “Lazarus and “the rich man””