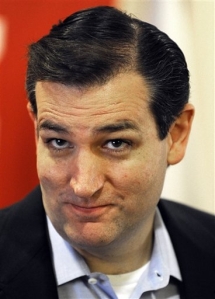 Comparing Obamacare to the Nazis, Senator Ted Cruz (TX) said: “Look, we saw in Britain, Neville Chamberlain, who told the British people, ‘Accept the Nazis. Yes, they’ll dominate the continent of Europe but that’s not our problem. Let’s appease them. Why? Because it can’t be done. We can’t possibly stand against them.’”

So which is it? Sometimes you paint the President as a Communist. Sometimes you paint him as a Fascist. You can’t have it both ways, Senator. Hitler was a Fascist. Stalin was a Communist. Obama is neither. Somehow the three have been mixed together into a political Molotov Cocktail. It’s reported this morning that a huge crowd in Iowa gave Senator Cruz an enthusiastic 36-second standing ovation.

Is it a coincidence that the President he loves to smear is black? Boogie-Man politics has a sordid history in this country.

Those whose memories are longer see the sneer of former Senator Joseph McCarthy on the faces of those who, like him, use innuendo and character assassination to destroy public figures and elected officials who do not agree that a Right Wing agenda is the definition of “American.” The arrogant sneer always looks the same. Because it is the same.

Paul Robeson, under investigation by the House Committee on Un-American Activities, doing battle with the Chair while testifying, spoke the words then that still echo in my ears. They still pertain to Boogie-Man politics:

“You are the Un-Americans, and you ought to be ashamed of yourselves.”