I lied. I can’t keep quiet! One more post — a follow-up to “Memorial Day 2018” — before retreating to the north woods. 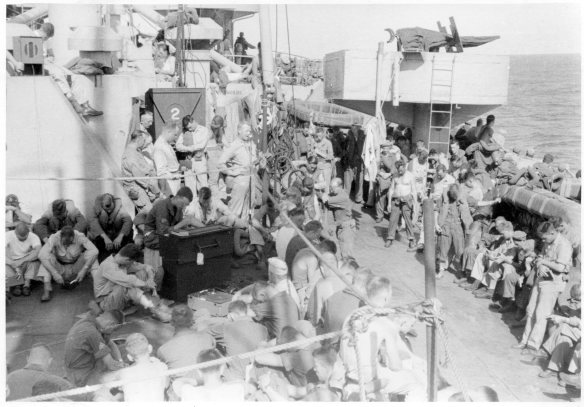 Rev. Kenneth Campbell Stewart, my father the chaplain, on board ship to Saipan, World War II.

My father was the Army Air Force Chaplain leading worship for the troops on board ship on their way to the South Pacific in World War II. Dad is buried in Indiantown Gap National Cemetery in Annville, Pennsylvania.

He was honored with a 21 gun salute, which, years later, I blamed for my hearing loss.
“Have you worked around loud noises? You have the ears of a forty-five year-old jack hammer operator,” said the audiologist. “No,” I said, “my mother’s deaf as a post.”

But my mother and I did listen to Dad’s preaching after he returned from the war. His words were soft-spoken. Peaceful and comforting. But there were times when his words from the pulpit afflicted the comfortable and rattled the saber-rattlers who glorified war and militarism. He preached the gospel, and, because he did and I heard it, I chose to follow in his footsteps. I chose to preach the gospel.

On Memorial Day 2018 on my way to the Minnesota wetland, I hear the echo of Taps from a bugler at Indiantown Gap National Cemetery and remember Dad and the fallen he buried. Sometimes the dead still speak.

6 thoughts on “My Father’s Voice”