It’s almost Christmas. Joseph and Mary stayed at our house last night as part of La Posada, a Mexican tradition re-enacting Mary and Joseph’s search for lodging in Bethlehem.

We welcomed them to our home for safe lodging, food, and a warm place.

When they arrived we sat them on the floor.

Barclay welcoming Joseph and Mary to our home.

Unfortunately, Barclay  quickly took a liking to Joseph’s left ear, so we moved Joseph and Mary into the pantry where they’d feel safe from a domestic terrorist attack.

Last night, after Barclay had gone to bed, I invited Joseph and Mary to join me  watching the presidential candidate debate.  Last night’s debate topic was terrorism. Refugees fleeing persecution and immigration policy were also discussed.

Our guests stayed very still. They were very quiet. They watched the faces on the TV screen. They listened to every word. As I went to the kitchen for a drink, Mary cuddled up to Joseph needing reassurance. She whispered, “Joseph, we have to get out of here before one of them gets elected -these people don’t like us! They’re mean. They sound just like Herod!”

I took them back to the safety of the pantry, put them back on the shelf, said goodnight, and closed the door so they’d feel more secure. Today they came out of the closet when another family came to protect them from Herod on their way to Bethlehem. But before they left, Joseph told Mary, “Don’t worry, honey, as soon as you give birth and are strong enough for the journey, we’re leaving for Egypt.” 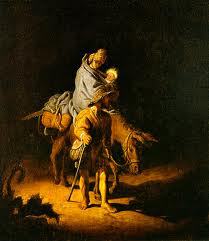 The Holy Family traveling to Egypt

An angel of the Lord appeared to Joseph in a dream and said, “Get up, take the child and his mother, and flee to Egypt, and remain there until I tell you; for Herod is about to search for the child, to destroy him.”  Then Joseph got up, took the child and his mother by night, and went to Egypt, and remained there until the death of Herod. This was to fulfill what had been spoken by the Lord through the prophet, “Out of Egypt I have called my son.” – Matthew 2:13-15

1 thought on “Joseph and Mary living in our pantry”