“[People] are undoubtedly more in danger from prosperity than from adversity, for when matters go smoothly, they flatter themselves, and are intoxicated by their success.”

This bit of wisdom from what many will consider an unlikely source invites reflection in these days when one of America’s most successful has met adversity from his peers at the G-20 meeting in Hamburg, Germany. 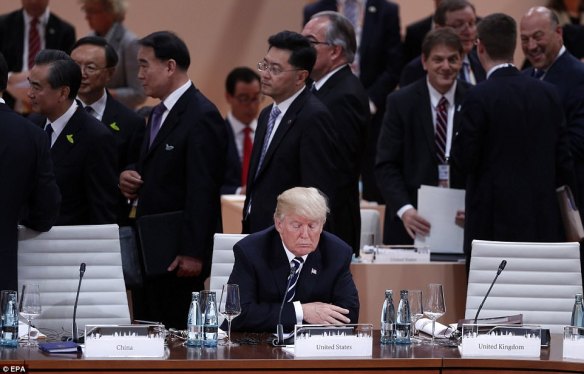 He sits by himself at the table while others mingle. The chairs of China and the United Kingdom, whose leaders he has scorned, stay empty until they will be filled, begrudgingly, at the very last minute. One may hope it is a sobering moment of adversity.

“As Gregor Samsa awoke one morning from uneasy dreams he found himself transformed in his bed into a gigantic insect. He was laying on his hard, as it were armor-plated, back . . . ” – Franz Kafka, The Metamorphosis.

As an infant, Donald Trump was baptized by a Presbyterian church in Queens, New York in the tradition of the controversial 16th century theologian John Calvin. Perhaps all these years later, after all the success, but suddenly regarded as a cockroach, feeling like Gregor Samsa, he’s reading the passage from John Calvin and remembering who he really is.

7 thoughts on “Intoxicated with Success”